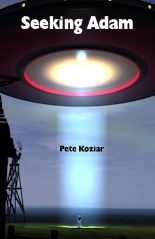 My new novel, Seeking Adam, is available from Amazon. You can read the first two chapters here. By the way, it has nothing to do with the story in my first novel, Dauntless Homecoming.

It is not unusual in the Christian community for young people of college age, or between college and their first job, to go on "summer missions." These are trips of several weeks or months that give them a taste of missions, and also helps out the longer term missionaries.

I started imagining a space-faring culture, for which missions trips wouldn't just be to far-off areas of their own world, but to completely different worlds. In addition, just as on our world, the authorities might not be very happy with missionaries, perhaps even locking them in prison when they catch them.

Given the kind of person I am, I then turned this upside down. In this book, we're the far-off, backwards people, and the summer missions intern is an alien known as a D'linwaa. Her name is Twilla, and she's expecting a pleasantly thrilling couple of months on this world, helping the leader of the team, Nortain.

It doesn't work out that way.

She winds up all alone, stranded on this world, hiding from the alien authorities bent on capturing her. In the midst of that, she discovers that these backward humans actually hold the key to what Twilla's culture has been seeking for centuries, the mysterious children of Adam.

It's lighter in tone than Dauntless Homecoming, and is much shorter, only around a third of the length.

Note that my first novel, Dauntless Homecoming, is mainstream, but based on a Christian world view. Seeking Adam, however, is much more blatantly Christian. If that bothers you, don't complain you weren't forewarned!